Had the pleasure one evening watching a Ring necked Pheasant as it and a couple of hen Pheasants fed while crossing some scrub ground. While the hens kept under cover in the longer grasses the cock remained in the open, like me was keeping watch.

Here he stands in the warm evening sun light showing off his well tailored suit and face markings.

They make a range of sounds has they communicate with each other, from crowing to beating there wings. Sometimes both at the same time. 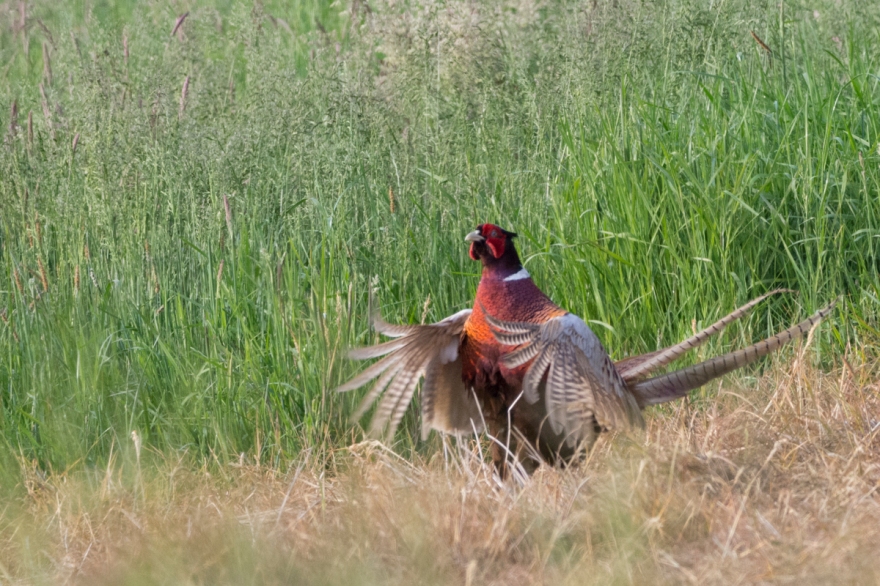 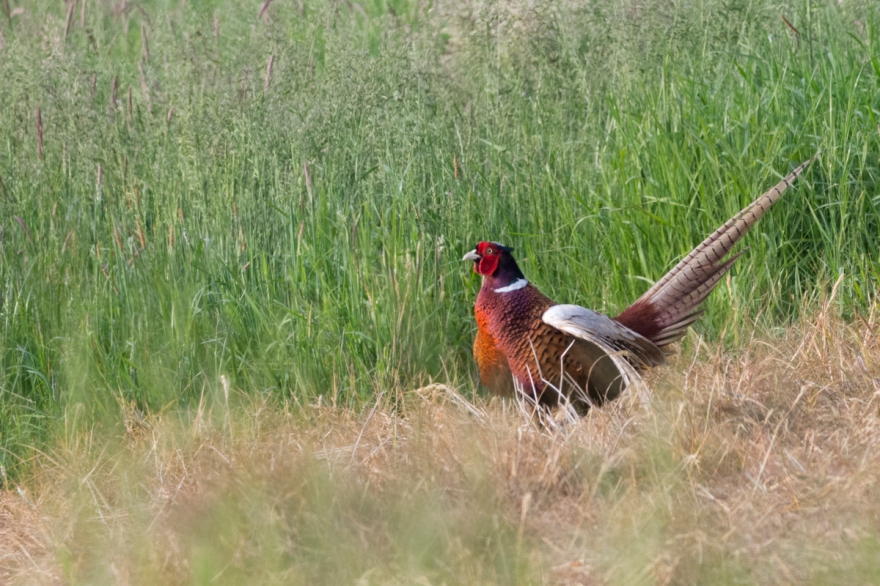 The above sequence of shots show the wing beating without the crowing. Below a couple of photographs from him crowing Pheasant calling 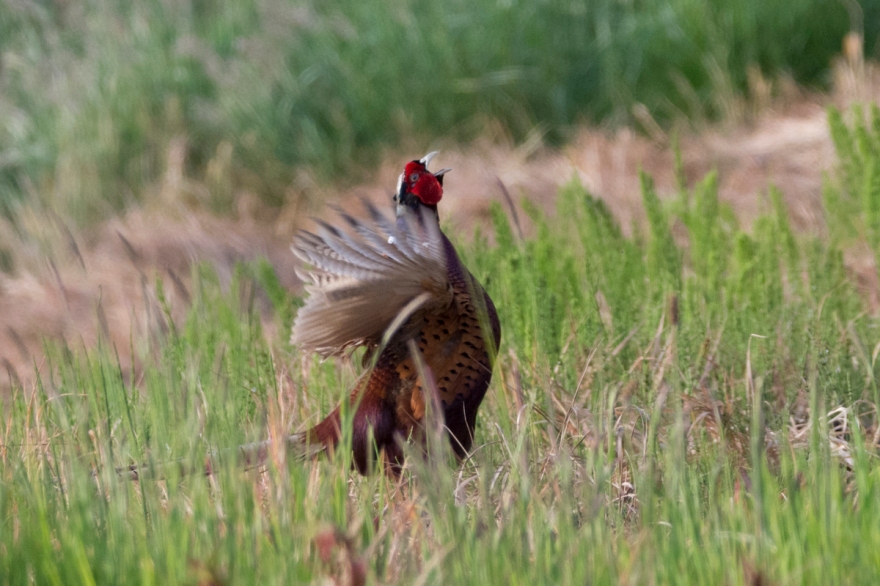 These Photographs where taken over a half hour period where I used a fence post has a make shift tripod. Shot with a Nikon D7200 and a Sigma 150 – 600 mm Telephoto lens. Processed and cropped in Lightroom. My last shot of the evening was where I caught him crossing a break in the ground cover and the warm light on his back.

I put the camera down and spent the last ten minutes just enjoying the scene.

Hope you have enjoyed seeing this beautiful bird with me and thank you for visiting.

While out visiting the other evening we were seated in the kitchen having a coffee. “Look there’s a Hare in the field” my host said. Sitting in the evening sun was an Irish Hare, I had my camera in the car so I nipped out and got it hoping the Hare would remain in his present spot. Nope he was moving away from me down the field and I watched has he disappeared into the lower lying ground. Left standing at the side of the garage looking at the country side, feeling the warmth of the sun and the sound of the birds I thought ‘ better finish my coffee ‘ when movement caught my eye. Coming from the lower ground where the Hare went into. It’s returning was my first thought but when I looked through the camera it was a Red Fox walking straight towards me.

I stood still close to the garage and got a few shots off.

Most animals detect movement rather that detail, so he was getting closer has he stopped to mark his territory every twenty feet or so. Turning to my left he stopped and looked where I was standing.

At this point we were around 25 metres apart and I think he caught my scent. But seeing no threat he continued on.  Crossing some marsh he was now heading away from me, a sound from higher ground made him stop and gave me a chance to get another shot.

A few moments later he disappeared into some shrub and was gone.

I waited around for a few minutes and the source of the noise he heard showed it’s self.

It was a hen and cock Ringed-necked Pheasant, I shot these has they walked across the field and up into some wooded land on my right.

Here’s a better look at the hen with her duller marking that help her to blend in to her environment while nesting. They can fly in short fast bursts if in danger and give a loud alarm call. They had left my line of vision for a minute or so and I heard the alarm call. Watching the line of the wood another fox came to view. This time crossing my right to left. I got a few shots but this time at a longer distance.

This was a different fox, it’s markings and the first had a slight limp from its front leg marks them apart. I know the first was a Dog or male fox by the way he marks his  territory but at no time did I see this one do that. Which makes me think it was a vixen (female fox), I was in the open taking these and when it spotted me it stopped briefly and ran off into the lower ground from which the hare gone.

I shot many more photos that shown but just to see them was great. The Red Fox is Ireland’s only wild dog.  Given they were shot for their fur these animals are very shy of humans.

Thank you for visiting, I hope you enjoyed the post and feel free to comment, good or bad.

Spotted this pheasant walking around my mothers garden. I got one shot before it disappeared over the hedge. It was only when I open the image I spotted it was missing it’s tail feathers.

Thank you for viewing

Over the winter bird feeders are hung up and bird seed gets dropped on the ground from the smaller birds feeding. Over the last few days a Ring-necked Pheasant has been dropping into peck around the ground under them. So sitting having a coffee this morning I looked out and there he was. Yes this is the cock bird has the hen is a dull brown colour. So grabbing  the camera and putting the automobile/car  between myself and the Pheasant, I made it over the yard without spooking the bird. Leaning over the front of the vehicle I got a few shots off. Here’s is one off them. 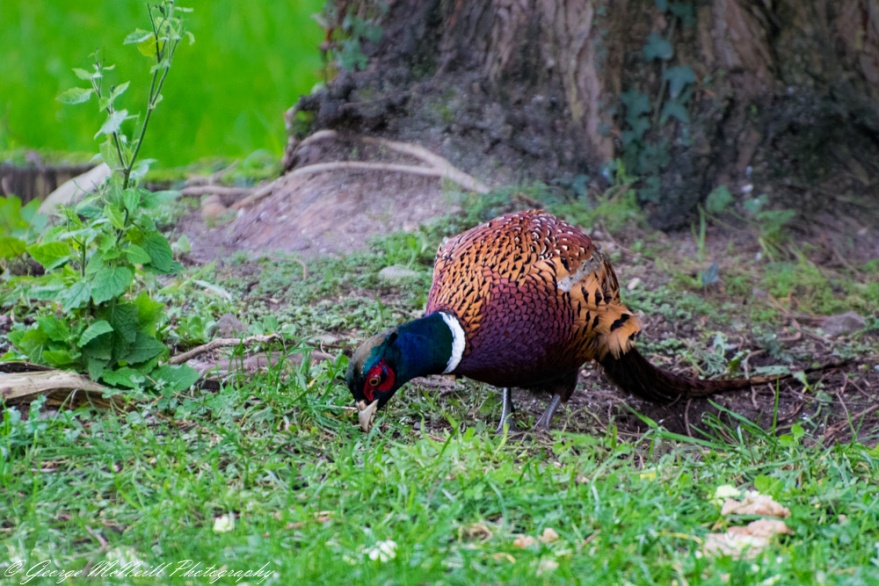 Enjoy and thank you for viewing.